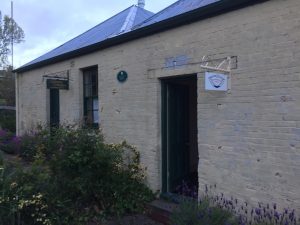 These cottages are believed to be the oldest remaining buildings on the site of the ship building yards in Napoleon Street. As such, they are a significant heritage component of the Battery Point Maritime Precinct. They are exposed brick, English bond, three bricks thick, with lath and plaster inside. The internal walls are of timber, with random width tongue and groove boards. The ceilings are the same and inside the roof are the battens to which shingles were once attached.

The cottages were built on a portion of the 90 acres of land originally granted to William Sorell, Esquire, Third Lieutenant – Governor of Van Diemen’s Land. These 90 acres were sold in 1824 to William Kermode for £600; in 1833 the block on which the Mariners’ Cottages stand was bought by James Kelly, Master Mariner of Hobart Town. He leased the site in 1839 to John Watson, shipbuilder, who bought it from Kelly in 1843 for £736 19s 4d.

The conveyance mentions “land and buildings” and it is believed that John Watson had already built the lower cottage or that he built it after purchasing the land on which he had purchased his famous shipyard. On one survey documenting the site, the lower cottage is marked as a store and it is believed that John Watson used it to store timber and other articles for ship building. There were also a blacksmiths shop and a carpenter’s shop nearby. 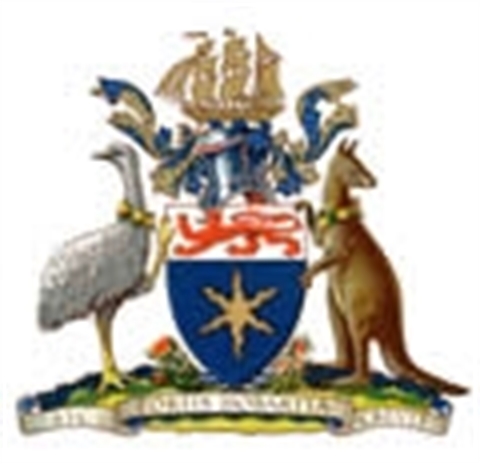 HCC Coat of Arms with Flying Childers on the Crest

John Watson arrived from England in 1831 and for two years he was in charge of the shipbuilding yard at Port Arthur. He set up his own business on site in 1839 and among the ships he built were the famous “Flying Squadron” – Flying Squirrel, Flying Fish, Flying Childers (the ship on the crest of the Hobart City Council) and Flying Fox. Others were the Sisters, Panama, Fair Tasmania, Free Trader, Swordfish and Southern Cross. The barque Runnymede, a famous whaler which featured on the cover of the 1988 Hobart phone book, was another Watson-built ship.

In 1856 the property was offered for sale:

“That Extensive, valuable and Important Property known as Mr Watson’s Ship-yard with cottages, workshops, stores, jetty and wharf etc. etc. which will be divided into convenient and judiciously arranged lots.”

The whole property was sold to Duncan McPherson for £4000. The shipyard was run by J Lucas and R A Jeffrey and later, in the 1880’s, by Messrs Tilly and Williams.

After the shipyard was sold, the cottages were leased to various tenants for more than a century. Some very poor additions during the early 20th century, rising damp and water spillage from the roadway all caused considerable damage, especially in the top cottage. 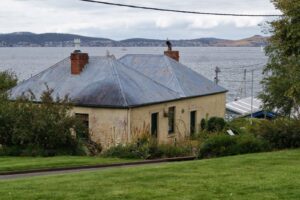 The Cottages seen from above in Napoleon St Park. Photo: Geoff Ritchie

In 1983 Hobart City Council, as the new owners, leased the cottages to the National Trust of Australia (Battery Point Group) and provided significant funds for its restoration. The Trust sub-leased the building to the Cruising Yacht Club of Tasmania who performed the restoration work, mostly with members' volunteer labour. Over the next 30 years, in addition to the occupancy by the Cruising Yacht Club, the cottages were used by a marine chandlery, an antiques shop and the Wooden Boat Guild of Tasmania. From 2013-2016 it was occupied by the TPI Association.

In 2016 the Hobart City Council undertook process of expressions of interest for occupancy and the Wooden Boat Guild of Tasmania entered into a 5 year lease to occupy both cottages for the activities of the Guild.