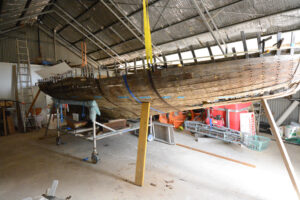 Length on the waterline 7530

No mast step or deck fixtures (at the time of photogrammetry)

The centre board slot in the keel, length of slot 1560, forward end of slot horizontally 3630 from stem.

Eighteen Twenty was designed and built in 1933 by Charlie Peel in Melbourne for the Australian manager of Johnny Walker Whiskey, Jim Douglas to compete in the Forster Cup. 1936 Forster Cup carnival in Melbourne at St Kilda. The Yoho Magazine, in a playful description of the Melbourne Forster Cup closing stages of the final heat, “…Queensland’s Vic Luas, a celebrated 18-Footer champion and crew accorded great ovation by thousands of Melbournians assembled on St Kilda’s waterfront attached by reports in the evening papers. A huge crowd waited patiently past twilight witnessing Gwylan for Queensland under special lights erected to illuminate the finish line as her nose pole cross the line a yard or so ahead of Victoria’s Eighteen Twenty…” delivering Queensland their first Forster Cup Carnival win, “…making Vic Lucas as a master helmsman!

The owner of the 21 Foot restricted class “Eighteen Twenty” enquired about Photogrammetry after hearing about Tassie Too , another 21 Foot restricted class, had her lines produced through photogrammetry. Eighteen Twenty was about to undergo a restoration project and the owners wanted the lines  and diagonals to produce frames so the vessel could be brought back to life.

Peter Higgs explained the process to the owner and asked if he would be interested in trialling the photogrammetry section of the handbook as a trial for Eighteen Twenty and the MMAPSS project.

Dialogue commenced but was kept to a minimum to ensure the handbook instructions worked from the instructional design perspective. Soon after, Peter Lethbridge provided 249 over-lapping photos. These were prepared as a point cloud file that provides data about the depth of field from the lens to a point on the object which produced the lines for both the internal dimensions and external dimensions of the vessel. The internal dimensions were required to make internal frames for Eighteen Twenty to manipulate the hull back to her original faired shape. 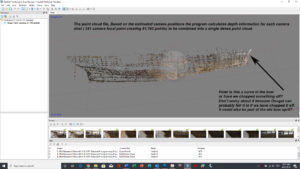 This exercise proved that using the Photogrammetry section of the handbook, with some modifications, was going to provide details for lines plans and other vessel documentation. 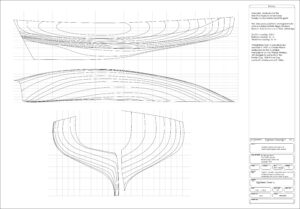 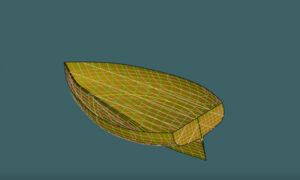 A 3D image from the 3D video of Eighteen Twenty

This classic historic boat, through its recent restoration was used as a trial for the MMAPSS Photogrammetry process. See https://superiorboatrestoration.com/