'Tamar' class dinghies were common in Tasmania in the mid 20th century. In 1947 the Tamar Yacht Club (TYC) established the specifications for a general-purpose, lightweight centreboard dinghy that could be used for such diverse purposes as racing under sail, rowing, fishing or as a yacht tender. They were built from ‘modern’ materials (principally plywood on timber frames), measured 11 ft in length and 4 ft 6 inches beam and were hard-chined to simplify construction for amateur builders. They could be fitted with a small outboard motor as well as carrying a stem-head sloop rig for sailing and racing.

Damar, a restored Tamar Dinghy previously owned by David and Margaret Barnes of the Lindisfarne Yacht Club and WBGT, was built by David Barnes around 1970-71. She carried a second-hand set of sails numbered 17 that evidently originated from T. L. Sward’s Mary M.

Damar was beautifully restored by Guild member Graeme Nichols after many months of tender love and care. She required a complete strip back to bare wood which revealed some structural damage that has now been repaired. As a result she is in sailing condition and ready for members to use at our monthly outings. Currently she is stored at Franklin in Andrew Perkins' shed, thanks Andrew, so if required for sailing fair warning needs to be given to Andrew as he is not on site full time and a time suitable to all needs to be arranged. 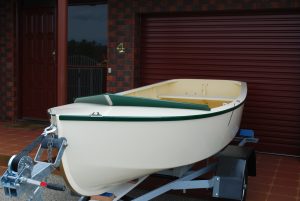 The origins of the Tamar Dinghy

In 1946 the Mersey Yacht Club (MYC) had one of its members Lew C Witt (formerly of Launceston) design a lightweight, centreboard sailing dinghy that could be used for sailing, rowing, fishing or even as a yacht tender. It was built of marine grade plywood and could be built by experienced amateurs.

In 1947 the general committee of the Tamar Yacht Club believed that the Australian clinker planked Cadet Dinghy was too expensive to build and too difficult for amateur construction and so they formed a subcommittee of six members under the chairmanship of Bart Hutton who drew up the specifications for a general purpose, lightweight centreboard sailing dinghy that could for used for such diverse purposes as racing under sail, rowing, fishing and could be also be used with a small outboard motor. They proposed a boat of similar overall configuration to the Mersey Dinghy but simpler construction so it would be easier for amateurs to construct.

Bart Hutton and his son Alf Hutton (He is still alive and living in Launceston) went to Devonport and borrowed a Mersey Dinghy for the TYC subcommittee to examine. They decided that it was too shallow in the transom, so they raised it three inches. They also raised the chines three inches at the forward end because they felt that that would make it more suitable for their local conditions. These were the only alterations.

Then Jimmy Tyson, a very talented wood worker and part time small boat builder, built the first Tamar Class Swan for Bart Hutton; it was the prototype. Vixen and Jolly Roger were the next two built by Alf Hutton for himself and Graeme Irvine. They were built at Alf Hutton’s father’s home, 16 Hill St., West Launceston. Herb Tyson, Jimmy’s brother, built Skua next. Then five or six dinghies were built in much the same time.

Graham Titmus, a junior draughtsman at the Launceston Marine Board and part time engineering student, then prepared a detailed set of plans by taking accurate measurements from Skua. These plans made it very suitable for amateur construction using the recently developed marine grade plywood.

The first four sets of sails were made by Prior in Melbourne with their sail numbers attached and, when delivered to Launceston, there was a competition to get the lowest number. As Herb Tyson was a committee member he chose No.1 although his boat was number three to be completed. Swan, the first one to be built, ended up with sail No.4 and Vixen No.6

Vixen and Skua were the first to be raced. They sailed in the Georgetown Regatta in about 1949.

James (Jimmy) Tyson built quite few of the initial Tamars.   He would also provide pre-cut pieces for frames, stems and transoms (Basic Kits) which enabled virtually unskilled amateurs to build accurately dimensioned hulls. Quite a few of the early Launceston and Tamar River Tamars were built using these "Kits".

The Tamar Yacht Club published a pamphlet to promote the class. They distributed these throughout the state. The Examiner newspaper also ran a series of articles on how to build a Tamar.

After a few of the early state championships it was evident that the weights of the Tamars varied quite considerably with the lighter boats having a speed advantage. One Southern Tasmanian Tamar, Scallywag (Peter Gourlay), had King Billy timber frames compared to the normal use of hardwood timber, so it was considerably lighter and virtually unbeatable. Consequently a new set of stricter measurement rules, which included a minimum weight, were adopted.

A number of very prominent Tasmanian Yachtsmen started their sailing careers in Tamars.