Terra Linna, the oldest surviving yacht built in Tasmania, was restored by the Wooden Boat Guild and re-launched in 2012.

Since her restoration and re-launch Terra Linna has been used by Guild members for some casual sailing on the Derwent. As well, she has been present at the Kettering Wooden Boat Rally on 3 occasions. At the 2014 KWBR she was visited by previous owner Brian Gatehouse, who went aboard and was most impressed with her current state. Brian had flown down from Melbourne for the occasion.

Soon after Brian’s visit, Guild members sailed her to the Cygnet Regatta to help with the Regatta’s 100 years celebration. In some way this voyage replicated what Terra Linna achieved in 1886 during the Port Esperance race:

“In March 1886 the now Royal Yacht Club of Tasmania conducted a race to Port Esperance for 28 footers with a sweepstake prize of 10s. per boat. Entries included F Turner’s Sunbeam, Mr Calder’s Magic, Mr Knight’s Terra Linna, Mr Lewis’s Milly, Mr Cheverton’s Mabel, and Mr Maddock’s Myrine… The usual lull under the Long Bay shore enabled those left in the race to house their topmasts and be ready to face the Huon River where a good ducking awaited them. Beyond Three Hut Point a very heavy sea was met; with the furious breeze that was blowing it was astonishing that any headway at all was made. It was do or die and through it they went. After working up under the lee of Huon Island the leaders made a fast passage to Blubber Head where the breeze fell much lighter and sailing was smooth and pleasant. The Terra Linna dropped her anchor first, 35 minutes ahead of Magic. She [Terra Linna] had won the hardest and longest race ever sailed by this generation of boats.”[i] 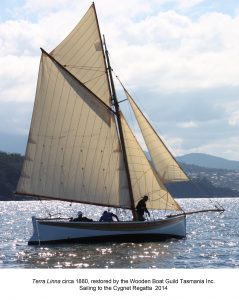 As well as the KWBR, Terra Linna has been sailed by members at the Australian Wooden Boat Festival, the Tall Ships event and two Openings of the sailing season, where she took a salute from the Governor. 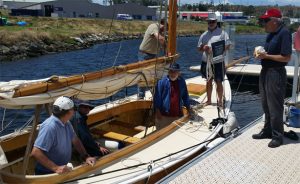 Preparing Terra Linna for the 2017 AWBF

It is hoped in coming seasons members will enter Terra Linna in mid week social races on the Derwent, either at Lindisfarne or Geilston Bay, so we can enjoy her sailing qualities.

[i] “Sailing On”, A History of the Royal Yacht Club of Tasmania, published by that club 1980