Terra Linna, the oldest surviving yacht built in Tasmania, was built at Sandy Bay in 1880-81 by her first owners George Luckman and Harrington Wedge Knight as a racing yacht for Hobart’s 28-foot waterline class. Terra Linna was constructed of Huon pine, copper fastened, batten-seam carvel built with two clinker top planks. She has a double-ended hull inspired by that of a whaleboat. 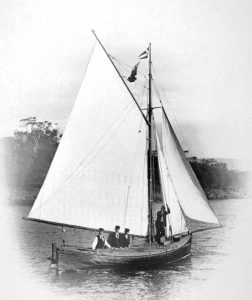 Terra Linna was a successful racing yacht for a few years before more modern designs were introduced in the later 1880s. H. W. Knight then became her sole owner and used her as a harbour cruiser until selling her to William G. P. Beddome in 1905. He used her as a cruiser on the Derwent and Channel until selling her about 1912 to owners believed to have been on the Huon River.

In 1953 Terra Linna returned to racing on the Derwent as an auxiliary motor cruiser, first owned by Arthur Wells and Don Webb of the Motor Yacht Club of Tasmania, and from about 1955 by a syndicate Albert Edward “Rex” Gatehouse, Neville Richards and Neville Wilson. They made regular cruises as far south as Southport.

From the 1970s to the 1990s Terra Linna had a succession of owners who found it increasingly difficult to keep the old boat afloat. The thin planking of this purpose-built racing yacht began to split, and the copper fastenings began to fail.

Terra Linna’s derelict remains were acquired by the WBGT in 2001, and rebuilt using some original components at the Bellerive home of Noel and Noelene Hall in 2007-2012. Terra Linna was officially relaunched at Bellerive by the Premier of Tasmania the Hon. Lara Giddings on 23 June 2012. 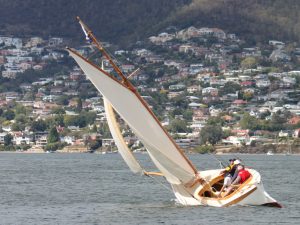 Terra Linna has since cruised on the Derwent and attended many maritime events. Her longest trip since restoration has been to the 150th Port Cygnet Regatta in March 2014.