As most members are aware the Guild has accepted a net-boat called Cornelia as a Guild boat. It is hoped that Cornelia will be used as a tow boat for Terra Linna and maybe also be available as a safety boat on occasions.
Cornelia has a King Billy carvel planked hull and is designed as a work boat with a wide full body and large load capacity. It is planned that after being restored by the Thursday Group at Battery Point, Cornelia will be be kept at the Prince of Wales marina next to Terra Linna.
Cornelia's early history is unknown, as well as the maker.

My earliest involvement came about while walking my dog along the Cornelian Bay - Botanical Gardens walk, and noticed that some of the boats never moved and one, in particular, was sinking into the sand. While enquiring about this boat I was informed about a similar boat that was semi-submerged behind one of the boat sheds. I decided to row around behind the boat sheds to check it out. While looking at the boat, the owner of the shed to which the boat was tied, came out and asked me whether I was the owner. She informed me that she didn't know where the dinghy came from and if the boat was not removed in a couple of days, her husband planned to smash up the boat as it was rubbing their pylons. I came back later that day with more rope, fenders (buoyancy) and motor to tow the dingy to the nearest beach. The dingy was submerged with only about 2 inches of the transom and stem above the water. You can tell from the photo below that it had be submerged for some time.

After removing many buckets of silt and numerous crabs, the full extent of the damage to the hull became apparent. 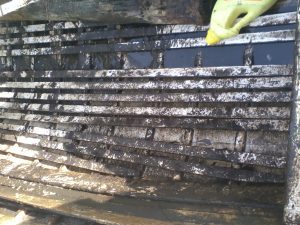 The main damage is where someone had put a ring bolt through the keel/stem area for a davit, and it had pulled through, hence a rather large hole.

After the inside was cleaned out and allowed to dry, it was time to think about getting it home.